In mid-September Erich von Falkenhayn, German Chief of the General Staff, considered his options for pursuing the war. Still believing that a successful conclusion was possible on the Western Front more rapidly than against Russia, he planned to threaten Britain by securing Belgian ports for use by German submarines and possibly capturing the British army embarkation cities of Calais and Dunkerque. He therefore moved the Crown Prince Rupprecht of Bavaria’s Sixth Army from its initial positions in Alsace and new Fourth Army, under command of Duke Albrecht of Wurttemberg, into the open German right flank.

Général Joseph Joffre, Commander-in-Chief of the French Army, and Sir John French, commander of British Forces, agreed that the BEF should relocate from the Aisne to Flanders. Two French territorial divisions completed the line between Bikschote and the Belgian Army at Diksmuide.

The Ypres Salient is one of the more heavily commemorated battlefields of the world war due to the enormous sacrifices endured by both sides during four years of the most exhausting trench warfare. From Armentières to Nieuwpoort, opposing forces suffered one million casualties. Over 145 military cemeteries dot the countryside, memorial stones to units and individuals appear everywhere, and even a few permanent fortifications in the form of concrete blockhouses remain. Since the fighting raged back and forth over the same ground, memorials to units and battlefield sites become intermixed.

A ‘Virtual Battlefield Tour’ from Fields of War: Fifty Key Battlefields in France and Belgium

Summary: On 7 October 1914, advance parties of German cavalry and cyclists (reconnaissance troops using bicycles) entered the city and levied a large fine on the townspeople. They occupied the city for three days before moving elsewhere. Although threatened during the German Lys Offensive in 1918, German troops would not enter the city ramparts again until 1940.

Major damage occurred in the spring of 1915, when the Germans moved up their super heavy artillery, including the 420-mm gun known as ‘Dicke Bertha’ (Big Bertha) in preparation for the Second Battle of Ypres. By the end of the war most of the city’s buildings had received substantial damage; many were completely destroyed.

During the First Battle of the Marne, the hastily assembled French Sixth Army threatened Kluck’s German First Army’s exposed right flank. There ensued a steady series of troop movements known as ‘The Race to the Sea’ in which both sides attempted to turn the enemy’s flank. Generalleutnant Erich von Falkenhayn sent the German Fourth Army (Duke Albrecht of Wurttemberg) including Beseler’s Corps against Flanders with the aim of capturing Calais. By 14 October, the Belgians were positioned behind the Yser and its canal, and the British 7th Division and 3rd Cavalry Division, forming the new IV Corps, were around Ypres.

Summary: On 18 October, the Germans opened their attack with a heavy artillery bombardment along the entire Belgian line, and followed it with infantry incursions into the forward outposts at Sint Pieters Kapelle, Keiem, and Beerst. An attempt by the German III Reserve Corps to take Westende was beaten back by shellfire from three British monitors lying off the coast. Belgian reserves were largely committed over the next two days while the assaults continued – some forward positions changing hands several times. On 20 October, attention shifted to Mannekensvere, where General Beseler’s corps sent three divisions against three Belgian regiments. Despite bombardment from German 210-mm howitzers, the Belgians held the city, even recapturing Lombardsijde on 22 October.

Also on 20 October, the German 43rd and 44thReserve Divisions started their assault upon Diksmuide against général Meiser’s brigade. On the roads leading into the city, Colonel Jacques and his 12th Regiment of the Line earned fame – and a statue in the Diksmuide town square – with his spirited defense of the approaches from the northeast, east and south. Ronarc’h’s men held the west bank of the river, north of the city. The German preliminary artillery barrage set Diksmuide on fire, while heavy winds spread the flames from house to house across the narrow streets. The cycle of infantry attack followed by artillery fire continued throughout the day. On 24 October, the Germans launched their most determined effort to take the city, launching fifteen waves of infantry after an exceptionally heavy bombardment. The German effort ultimately failed, but the casualties and diminishing supplies of ammunition were weakening the Belgian resistance.

View 15 Battle of the Yser: 18 to 31 October 1914 – A Virtual Battlefield Tour by French Battlefields (www.frenchbattlefields.com) in a larger map

END_OF_DOCUMENT_TOKEN_TO_BE_REPLACED

The German Schlieffen Plan required the defeat of the French army before Germany turned eastward to face the larger, but slowly mobilizing Russian forces.  The German plan considered the Ardennes region as too rugged and without a road network sufficient to support the large military movements required to face the French Army. Thus, the thirty-four divisions of the German First, Second, and Third Armies were to be funneled around Liège through the 16 km gap between the Netherlands and the Ardennes. Not wanting to pull The Netherlands into the conflict, the plan carefully remained south of the Dutch territory of Maastricht. Belgian resistance was expected to be little more than symbolic.

A French Battlefields “Virtual Battlefield Tour” [This battlefield is not included in Fields of War.]

Summary: The German Army of the Meuse, commanded by General Otto von Emmich crossed the border on 4 August with six brigades of infantry and three cavalry divisions (II Calvary Corps under Generalleutnant Georg von der Marwitz). His orders were to capture the bridges over the Meuse River at Liège for use by larger following forces. The opening engagement of the First World War was on.

On 4 August, Fort Barchon was the first fortification attacked, but Infantry Regiment 53 was driven back with heavy losses. On 5 August, the 2nd and 4th Cavalry Divisions forded the Meuse to the north at Lixhe. Belgian troops were quick to destroy the bridges above and below the city and German efforts to construct temporary crossings came under fire from the fortifications.

View Siege of Liege – A Virtual Battlefield Tour by French Battlefields (www.frenchbattlefields.com) in a larger map

END_OF_DOCUMENT_TOKEN_TO_BE_REPLACED

Summary: In the early morning of 22 August, a patrol of the British 4th Dragoon Guards encountered an advance unit of German Cuirassiers northeast of Mons, who were reconnoitering the approaches to the city. A few shots were fired, and a short chase took place, during which the dragoons caught the retiring Germans after 3 km and inflicted twenty-three casualties.

In the early mists of a drizzly rain the next morning, a short artillery bombardment from guns established on the high ground north of the Canal du Centre, northeast of Mons, fell upon the 4th Middlesex Regiment positioned south of Obourg. At approximately 09:00, they and the adjoining 4th Royal Fusiliers to their left at Nimy were surprised to see waves of German 18th Division infantry advancing across the meadows to the north. Rapid fire rifle slew lines of the German infantry, much like machine guns were to do to British infantry in the Somme battles two years later. The German were forced to withdraw to regroup. A short time later the German infantry, strengthened by regiments from the 17th Division, advanced again, extending the fight to the south. The German losses were again heavy and their massed formations broke into smaller units which started infiltrating the British flanks.

View Battle of Mons: 23 to 24 August 1914 – A Virtual Battlefield Tour by French Battlefields (www.frenchbattlefields.com) in a larger map

END_OF_DOCUMENT_TOKEN_TO_BE_REPLACED 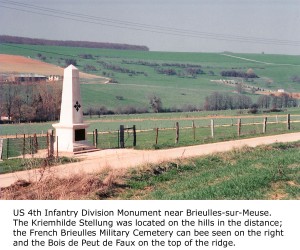 Struggling to get a perspective of the monument with the forests and hills of the stellung in the background, I climbed up a 7 foot verge and walked 300 feet or so along it. No sooner had I positioned myself, than I heard the rumble of heavy farm machinery. I knew immediately that it had to be coming down the farm track now blocked by my parked rental car. I hastened along the top of the verge and slipped down the steep incline in time to meet the tractor that had stopped just inches away from the car’s front bumper. I prepared myself for a tongue-lashing in French, or worse. The tractor’s driver stepped out of the cab and climbed down – presenting me with what I thought must be the largest farmer in northern France. END_OF_DOCUMENT_TOKEN_TO_BE_REPLACED