Summary: In the early morning of 22 August, a patrol of the British 4th Dragoon Guards encountered an advance unit of German Cuirassiers northeast of Mons, who were reconnoitering the approaches to the city. A few shots were fired, and a short chase took place, during which the dragoons caught the retiring Germans after 3 km and inflicted twenty-three casualties.

In the early mists of a drizzly rain the next morning, a short artillery bombardment from guns established on the high ground north of the Canal du Centre, northeast of Mons, fell upon the 4th Middlesex Regiment positioned south of Obourg. At approximately 09:00, they and the adjoining 4th Royal Fusiliers to their left at Nimy were surprised to see waves of German 18th Division infantry advancing across the meadows to the north. Rapid fire rifle slew lines of the German infantry, much like machine guns were to do to British infantry in the Somme battles two years later. The German were forced to withdraw to regroup. A short time later the German infantry, strengthened by regiments from the 17th Division, advanced again, extending the fight to the south. The German losses were again heavy and their massed formations broke into smaller units which started infiltrating the British flanks.

View Battle of Mons: 23 to 24 August 1914 – A Virtual Battlefield Tour by French Battlefields (www.frenchbattlefields.com) in a larger map

END_OF_DOCUMENT_TOKEN_TO_BE_REPLACED

One would think that First World War cemeteries were abandoned, long forgotten plots of ground. Not so. Even 94 years after the end of the war, these grassy spaces cut out of the cultivated fields of France see visitors. They come for many reasons; curiosity, historical interest or research, to seek the resting place of an ancestor, to commemorate an anniversary of a battle or great deed of heroism, and some come to bury the dead.

Such was the case on April 21, 2004 as we were touring Somme battlefield sites. Actually I had gotten lost – I was on the wrong road and I was searching for a route back to Albert. We passed Commonwealth War Graves Commission’s Serre Cemetery #2. We recognized it as we had been here several times before. It is one of the largest on the Somme battlefield. Attacks in the area were frequent during the 1916 Battle of the Somme. In spring 1917, the German fell back to the Hindenburg Line leaving the area a great wasteland. A number of new cemeteries were then created to hold the dead from the previous year’s battles. After the war, Serre #2 became an accumulation cemetery for bodies originally buried in area churchyards. It now holds 7,127 Commonwealth burials from the First World War; of these 4,944 remain unidentified.

While this popular location is rarely completely empty, we noticed an unusually large number of vehicles parked along the road in front of it. Small groups of people milled about, including some in military uniform. We realized that some ceremony was about to take place, so we stopped to observe. 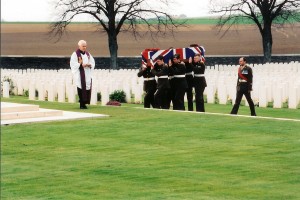 END_OF_DOCUMENT_TOKEN_TO_BE_REPLACED

He was a carpenter suffering idleness following a severely disabling work accident and looking for some activity to occupy his idle hours. He had to keep his hands busy to keep his mind off on his constant pain. He could also not escape from where he lived. Ivan Sinnaeve lived in the heart of the Ypres battlefield of the First World War.

Ypres was a provincial town whose glory days were in the Middle Ages. It was seldom thought of outside the region until the opening months of the war. The initial German invasion of 1914 had carried across most of tiny Belgium before being stopped at the gates of the city by an Allied Army of French, Belgian and British soldiers. However, the action had left Ypres at the base of a protruding salient into enemy lines under continuous observation from enemy controlled high ground. For the next four years the German Army tried to eliminate the salient and the British Army defended it.

Ypres was shelled, bombed, cursed, and died for thousands of times over. In military texts the battles around Ypres are given numerical titles; the 1st Battle of Ypres, the 2nd Battle of Ypres, the 3rd, the 4th. To the survivors, however, the battles have other names; the Gas Attack – the first use of poison gas in warfare in April 1915; Messines Ridge – the simultaneous explosion of nineteen mine shafts under German lines which obliterated 10,000 soldiers; and the ultimate obscenity – the Battle of Passchendaele. END_OF_DOCUMENT_TOKEN_TO_BE_REPLACED

Summary: King Edward III of England landed an army of 15,000 men at St-Vaast-la-Hougue on the Cotentin peninsula in Normandy. His objective was to claim the crown of France as his own. Edward was prevented from attacking Paris by maneuver of the much larger army of the French king, Philip VI. Now trapped and without ability for resupply, Edward attempted to join forces with his Flemish allies to the north. Philip’s vanguard, led by Jean de Luxembourg fought to deny Edward bridges over the Somme River, essentially assuring his destruction. At Crecy, Edward positioned his dismounted men-at-arms and his archers so as to take maximum advantage of the longbow’s superior firepower. The French army, the largest in Europe, fielded thousands of mounted, armored knights. Although greatly outnumbered, Edward’s army, led on the field by his son the Prince of Wales (The Black Prince), produced a stunning victory over the French aristocracy. 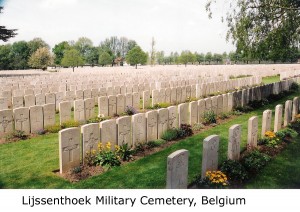 Military Cemetery, located southwest of Poperinge. We had been informed that this particular cemetery was one of the largest and most beautiful of the over 1000 Commonwealth War Graves Cemeteries in Europe. We also believed that a handful of Americans had ended up buried there and we felt a special obligation to locate our countrymen’s graves. END_OF_DOCUMENT_TOKEN_TO_BE_REPLACED